Young people and the future of Europe

AEGEE-Europe carried out several activities in preparation for the European Elections under the My Europe My Say and the “Why European Parliament 2.0.” Projects which aim at fostering youth political participation. A Voting Guide in the form of an App was created, to find out with only two clicks how to vote in the elections. During seven Conventions and a final conference organized by Y Vote, more than 175 young people drafted their future vision for Europe into “Our Agenda for Europe” with in total 26 recommendations connected with the topics of the EU youth agenda. 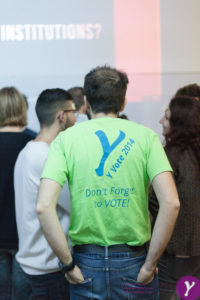 With the Europe on Track project a space for discussion is created and the opinions of youth in Europe are captured, especially on how young people see the future of Europe and how they can participate in politics. Thanks to Interrail and Erasmus+ 6 ambassadors in 2 teams travelled across Europe by train in March and April to deliver workshops, interview young people and organize events reaching over 1.000 young people from over 20 cities in Europe. Europe on Track reached inspires and empowers them to take an active role in today’s changing world.

With the “Why European Parliament 2.0. – YEP 2.0.” project young people are encouraged to be a part of the European discussions and are shown the importance of the European Parliament has in our daily life. After 1 festival, 2 action tours, 5 Regional meetings, 1 social media campaign, 1 conference, and 2 trainings, an environment was created where young people feel comfortable expressing their thoughts and opinions. It also showed the importance of the youth and youth organization in the debate about the future of Europe.