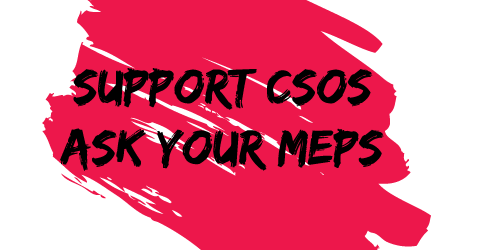 SUPPORT CSOs: ASK YOUR MEP TO VOTE FOR THE EUROPEAN VALUES INSTRUMENT RESOLUTION

UPDATE: You were more than 1,000 to mobilise and send emails, in just 3 days. This huge success certainly has a big share in the successful outcome of the votes, as the European Parliament adopted the resolution on Thursday, 19 April, with an overwhelming majority (489 votes for, 137 against and 14 abstentions).

On behalf of all the organisations that strongly believe in fundamental rights and values and joined their forces into putting pressure on the Parliament, we want to say a big thank you for your commitment and action!

Your outstanding mobilisation pushed the main political groups to adopt the resolution. Yet, the battle for the European Values Instrument is not over. The European Commission has to take on the call and propose a legislative act.

A few days earlier, EU commissioner for Justice, Vera Jourova, expressed her support for the idea of a financial instrument to support civil society organisations active in promoting and protecting fundamental values in the European Union. She added “We must find the right path to finance NGOs and I am ready to work with the Parliament to prepare a plan to this end”.

We take her at her word and we will follow up the developments.

A MEGA THANK YOU TO ALL THE SIGNATORIES

The members of the European Parliament will meet for a Plenary session in the week of 16-20 April. Among the debates and votes scheduled, one is of particular importance for civil society organisations and activists fighting for Fundamental values across the continent: the resolution on the European Values Instrument.

This resolution is not just about creating a financial mechanism, it is first and firemost a commitment from the European institutions to recognize the vital role to uphold and promote the values enshrined in Art. 2 TEU. With this document, the LIBE committee of the European Parliament urges the European Commission and the Council to enshrin this mechanism in the next Multiannual Financial Framework (MFF), complementary to the existing European programmes for civil society organisations.

This is where your help is very much needed! You are aware of the difficulties faced by some local or national NGOs, confronted either to authoritarian governments or to severe austerity measures that cut in the social budget. This Instrument would help these organisations in their daily activities, through a flexible and transparent tool, accessible to all those standing for Democracy, Fundamental Rights and the Rule of Law. Make a contribution to our call and send a letter drafted by Civil Society Europe and let your MEPs know what is at stake: CALL UPON THEM TO VOTE FOR THE RESOLUTION THIS WEEK!

The more letters of support they receive, the more chances for them to vote for the resolution. The equation is simple, yet requires a strong engagement from all of us. If you want to write a personal letter to your MEP, feel free to do so. You can simply have a look at the website of the European Parliament or use our form below to get in contact with your national MEPs!

Download our template letter and send it to your national MEPs. You can also feel free to re-write it your own way or translate it into your language.

Sign the petition for a truly democratic Europe!
13 May 2019