#NODAYWITHOUTUS: MORE THAN A MOBILISATION, A PRIDE! 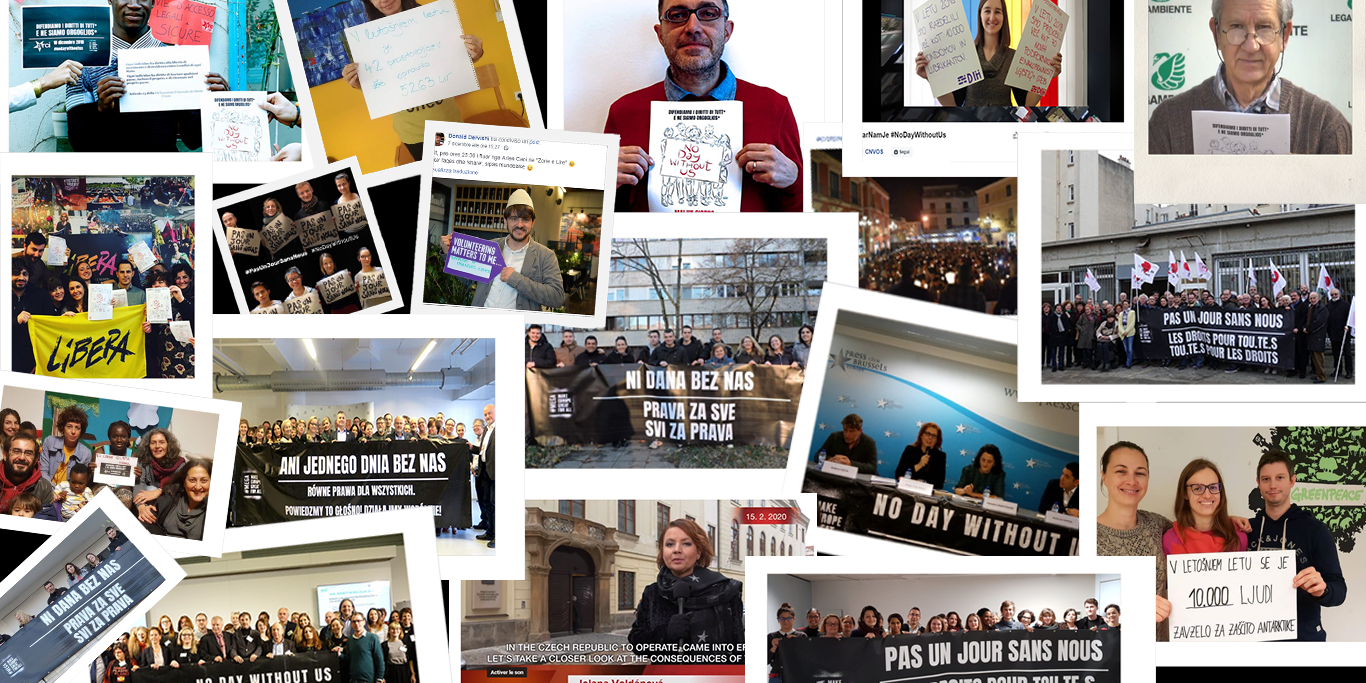 We want to say a huge thank you for your engagement and we are very happy and proud to announce that thousands of civic actors mobilised on Human Rights Day – 10th December, calling for NO DAY WITHOUT US!

We gathered together in solidarity, we stood up for our fights for rights for all and we should make this an annual civic pride day!

Our mobilsation spread across 29 countries within the EU and neighboring countries, in big cities or small communities, in your usual place of work or in public spaces, in large or small groups, online and offline.

Some joined demonstrations against illiberal and repressive governments or big infrastructure projects in Italy and Serbia, others lighted candles or recited articles of the Declaration of human rights at their workplace, or in schools, cafes and public squares. Some stuck posters and stickers in public places, others organised networking events or seminars. Some silenced their websites, some explained through short videos, positive stories or photo exhibitions how they make Human rights a reality every day with their work. 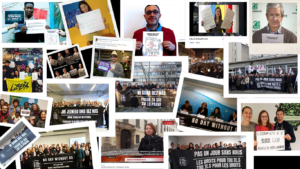 The success of the action day went far beyond our expectations regarding reaching out to constituencies and citizens: all in all, our actions engaged over 2 million people online, several thousands people offline, over 200 local committees.

FLASH BACK ON THE MOBILISATION

We are still in the process of collecting numbers and figures for the offline mobilization, on the map, you can have an idea of the kind of actions that were carried out.

Also, we have prepared an infographic summarising the engagement on the action day, as well as a video explaining the mobilisation.

The news agencies all over Europe reported about the #NoDayWithoutUs, like ANSA and Termoli online in Italy, Novice in Slovenia, or Gandul in Romania.

The European Civic Forum prepared a policy paper  with key challenges and attacks to civic space and fundamental rights we observe in Europe today, based on evidence and information collected through Civic Space Watch. The document formulates some recommendations for EU institutions to respond to these challenges. In addition, a joint statement for EU action has been widely supported by European Civil Society Organisations including ECF.

As part of the Make Europe Great for All – MEGA campaign, we are collecting resources and recommendations to bring to policymakers and political parties candidates (including lead candidates) ahead of the elections. Please share with us your resources to contribute to the debate to #MakeEuropeGreatForAll.

Upcoming events in 2019 include launch of Activizenship #3 magazine in Brussels on 7th February, an international civil society conference in Berlin jointly organized with BBE on 21-22 March, an NGO Forum in the frame of the Romanian EU Presidency in Sibiu in April jointly organized with FDSC and Sabir Festival in Lecce, Italy, on 16-19 May organized by ARCI.

As there can be

No Day Without US

, let’s keep up the momentum !

@EUinmyRegion conference on engaging citizens in #cohesion policy @dubravkasuica says the old way of doing politics is no longer acceptable, we need citizens on board! How about giving #civilsociety real voice in the Conference for the #FutureofEurope? #MakeEuropeGreatforAll