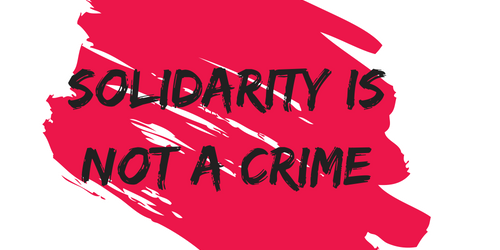 With their judgment on Friday, Constitutional Council recognises humanitarian help and solidarity as legitimate.

On 6 July, the Constitutional Council in France confirmed fraternity as a core constitutional principle, and therefore stating that “helping others, even illegitimately present on the national territory, is legitimate“, in the name of Article 2 of the Declaration of Human Rights and with reference to the preamble to the French Constitution and Article 72-3.
While the French legislator is asked to now find a way to reconcile two constitutional principles of fraternity and safeguard of public order, the Court ruling abolishes the “offence of solidarity” and recognises the freedom to provide humanitarian assistance and care to people regardless of the regularity of their stay on the French territory “and without direct or indirect compensation” is recognised as legitimate.

This is a huge legal and political victory for human rights defenders in France, and potentially Europewide. Raffaella Bolini from the Italian association ARCI, writes:

Today, Cedric Herrou won, and with him all democratic forces in France and Europe. […] a true success to Make Europe Great for all.

Recalling that fraternity is not just a word but a legal reality, the Constitutional Council comforts those who try to bring it to life for migrants. The LDH welcomes this reminder and hopes that the government, the prosecution and the courts will abide by the letter and the spirit of this decision by ceasing to wrongfully prosecute those men and women who implement the principle of solidarity.

The issue was raised at the Constitutional Court by Cedric Herrou, the symbol of criminalisation of solidarity when he was sentenced to four months in prison by the Court of Appeal of Aix-en-Provence in August 2017 for having transported some two hundred migrants from the Italian border to provide refuge in his home, and by the teacher and researcher Pierre-Alain Mannoni, also sentenced by the Aix-en-Provence Court of Appeal to two months’ prison for accompanying three Eritreans to a station.

Cedric and Pierre-Alain were only two of the many people sanctioned due to their humanitarian aid to migrants, this is a victory for all. However, it is important to remember that criminalisation of solidarity can take several shapes and it is spreading across Europe. For example, a few months ago we reported how the shelter by Secours Populaire in Hayange was left without electricity and discredited by the local authorities due to their disagreement on a measure that would have discriminated asylum-seekers. It is crucial to keep on reporting on other forms of abuse by governing bodies and keep up the work to make this just a first step toward a recognition of solidarity and humanitarian help across Europe.

Law on Business Secrecy – Do not let enterprises and business banks impose a law of silence!
6 April 2018
Go to Top
X